Fashion designer Katharine Hamnett, best known for her bold political statement t-shirts, has lent her voice to the growing international outcry against Japan’s decision to resume the commercial slaughter of whales this summer.

In partnership with global charity Whale and Dolphin Conservation (WDC), she has released a new t-shirt design which carries the simple message ‘Please Stop Killing Whales’, aimed at the Japanese government and those in power in Iceland and Norway, who ignore the current international ban on hunting whales for commercial profit. Several high profile people, including Green Party MP Caroline Lucas have already leant their support.

The release of the new t-shirt, which is printed and produced by ethical clothing manufacturer Teemill, comes 36 years after Hamnett initially launched her ‘Save the Whale’, ‘Choose Life’, ‘Ban Pollution’ t-shirt range, making her name as a political activist and champion of ethical fashion.

Hamnett comments: "We do not need to kill whales. They are a vital part of the marine ecosystem. All living things have a symbiotic relationship."

Last year Japan’s government announced that it was turning its back on a 37-year international ban on killing whales for commercial profit and leaving the International Whaling Commission (the global body responsible for regulating whale hunting). The ban was arguably one of the greatest ever achievements in international conservation, and came into force following worldwide condemnation of the way entire whale species were being driven to extinction.

“Whaling and humankind’s destruction of the marine environment has led to the loss of 80% of the original whale biomass from our oceans, and many populations still haven’t recovered almost four decades since the ban came into force,” says Chris Butler-Stroud, chief executive of Whale and Dolphin Conservation. “The slaughter of whales for profit and for politics is inhumane, it is wrong and it has far-reaching impacts for the health of the planet. We can never allow the ban on hunting whales to be overturned and are grateful to Katherine Hamnett and Teemill for their support in raising this issue.”

Whaling is a cruel practice using grenade-tipped harpoons fired from a moving vessel that explode on impact, often leaving the whale in agony for up to an hour before death. A percentage of money raised from the sales of the t-shirt will support WDC’s efforts to end the senseless practice of whale hunting around the globe.

For more information on how to buy the t-shirts go to https://wdc.teemill.com/

1.WDC, Whale and Dolphin Conservation, is the leading global charity dedicated to the conservation and protection of whales and dolphins. We defend these remarkable creatures against the many threats they face through campaigns, lobbying, advising governments, conservation projects, field research and rescue.

2.Teemill’s T-shirts are certified organic cotton, GM free, not tested on animals, do not contain animal-derived products and are printed in the UK with low waste printing tech. They are made in a renewable energy powered factory audited for a wide range of social and sustainability criteria. 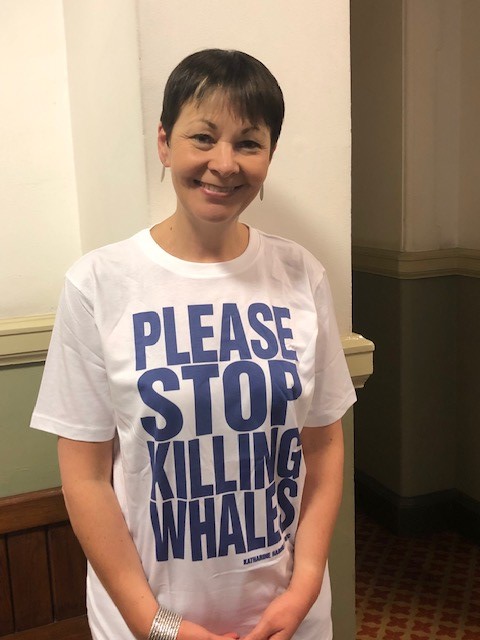