British icon, the Aston Martin Bulldog, now in its sixth month of restoration at Classic Motor Cars in Bridgnorth, continues to reveal its secrets to those who are working on it.

Managing Director, Nigel Woodward said: “ The car is dramatically designed in every way and has inspired the restoration team like no other car we have worked on previously. As the car has been dismantled and revealed its history, it has prompted numerous questions as to why certain elements of the car were built in a certain way.”

He added: “it’s almost like an archaeological dig! You find something interesting and then must work out why it was constructed in that way, how to put it back together and whether it should be improved whilst ensuring that the historical integrity of the car remains the same.”

Nigel said: “ What has been revealed is that the basic structure showed a lack of torsional rigidity by todays standards and complete lack of roll over protection. A concealed internal cage is being designed and constructed to correct both these issues without interrupting the originality of the car. For a vehicle with such enormous performance, we felt this was an essential safety improvement to allow the car to be driven in the manner for which it was designed.”

He added: “ When you first see Bulldog it appears to be a flat faceted design but it’s not. The car has subtle compound curves in many of its body panels and it is essential that we retain those has we rebuild the car. The English wheel will certainly not be redundant in this project.”

The project has so inspired those working on it that they have designed their own team Bulldog T-shirt.

Liz Collings, who comes from Wolverhampton and is one of the team working on Bulldog said: ‘I’m really excited to be working on the Bulldog project. It's an honour to be part of the team that will be bringing this iconic car back to its former glory. It will be great to see the car on the road and performing to its full potential'

Marketing Director, David Barzilay said: “ There is huge interest in the car from the general public who have heard that it is being restored and want to know how the restoration is proceeding. Many remember the publicity that was produced when the car was first unveiled, and they constantly ask when they might be able to see the restored car.”

Project Leader, Richard Gauntlett, son of the late Victor Gauntlett (former CEO and Chairman of Aston Martin) is project managing the restoration and overseeing the car’s exciting future said: “ The first 6 months of this heroic project have been truly fascinating. The restoration is absolutely forensic in every respect and we have seen the car offer up its past, we have located and spoken with every member of the core team who built it and we are compiling every piece of information we can find regarding its extraordinary history. 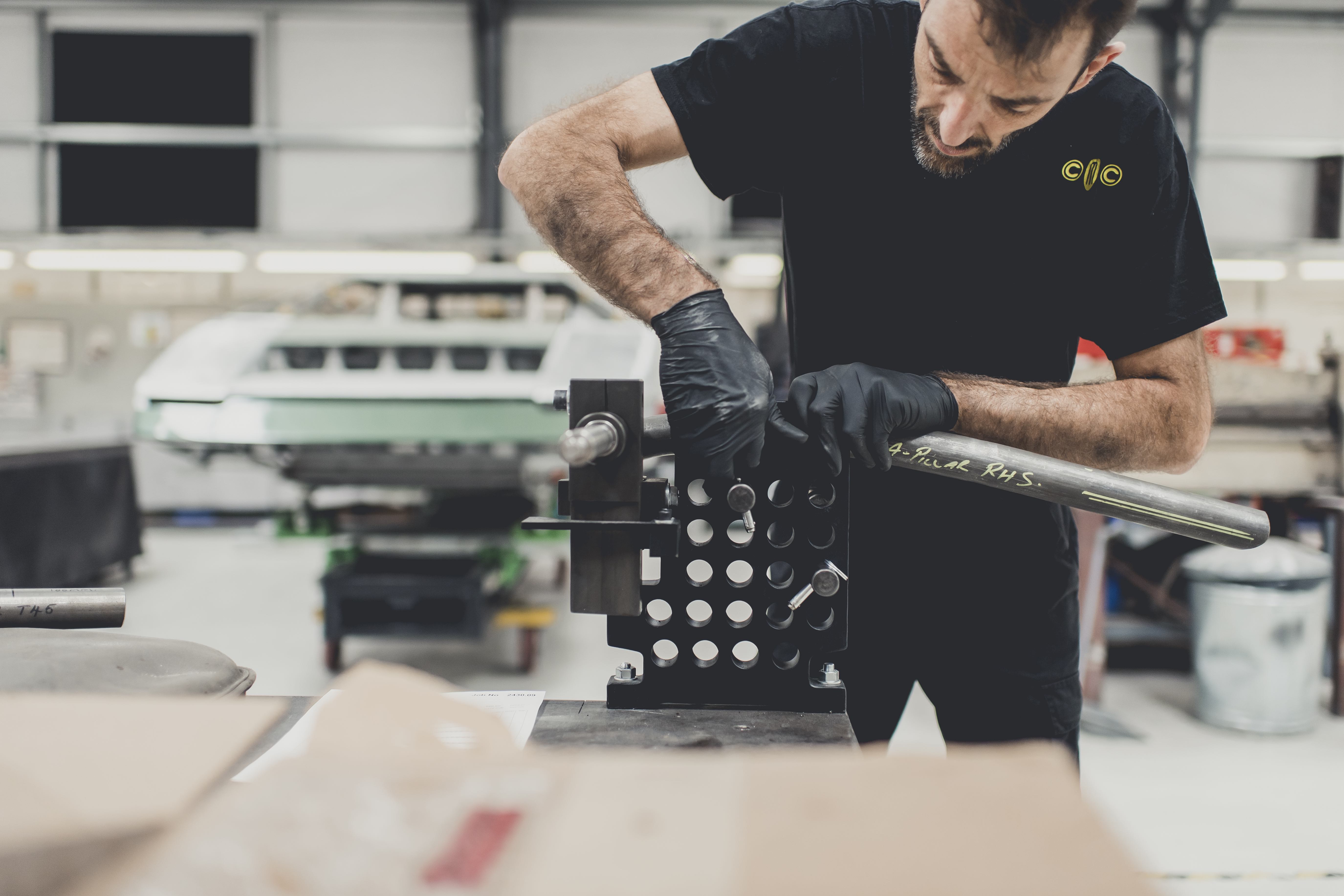 The car underwent a number of modifications early in its life in relation to the exhaust’s outlet positions.

What has been revealed is that the basic structure showed a lack of torsional rigidity by todays standards and complete lack of roll over protection. A concealed internal cage is being designed and constructed to correct both these issues without interrupting the originality of the car.

Classic Motor Cars based in Bridgnorth in Shropshire, has been at the forefront of classic car restoration for the last 25 years starting with Jaguar and then moving on to other marques including Aston Martin

It is the only company in the world to have received restoration of the year twice at the Octane International awards and is constantly striving to support the wider classic car family.

CMC is an owner managed Trust where the staff actually own the company, and is a partner of The Marches Centre of Manufacturing & Technology (MCMT) an employer-led response to bridging the skills gap by creating industry-ready apprenticeships and delivering the best upskilling opportunities including courses that teach apprentices classic car skills.

Why not view our premises; https://youtu.be/rO988QVZhCk