An initiative to reduce social isolation in a Black Country suburb is proving so popular that the pom pom phenomenon is spreading to different continents around the world.

Whilst searching for a venue to host a new coffee morning event in November 2018, employment support group Just Straight Talk approached Bromford to see if they could help. The housing association, with thousands of homes across the Black Country and Birmingham, offered them the use of Rainbow Street Community Centre, in Coseley, free of charge.

A craft element was quickly added to the weekly coffee morning as local residents were encouraged to make colourful knitted pom poms; each with a laminated note spreading positive messages about loneliness and isolation. The quirky creations have proven so popular that dozens of them have appeared right across Coseley since the start of the year as residents fix them to trees, railings and signposts as well as leaving them scattered in pubs, shops and waiting rooms for people to find. 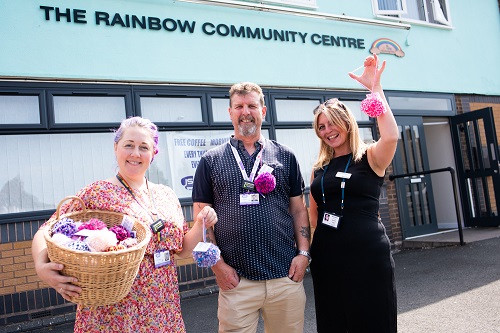 Community connectors Shona Gilsenan and Dave Roberts, who both work for Just Straight Talk, and Bromford neighbourhood coach Daniela Williams showing off some of the quirky creations

Rainbows and Brownies groups and a nearby nursing home have also got involved in the craze sweeping the area and a dedicated Facebook page promoting the ‘pom bomb’ initiative has attracted more than 500 ‘likes’. What started as a small community partnership has now travelled overseas with people posting photos of the pom poms in places like Madeira in Portugal and Amsterdam in the Netherlands. Others have travelled to Jamaica, Greece, South Africa, Spain and Wales.

Kate Beale, director of Just Straight Talk, said: “We’re really pleased that Bromford were able to allow us to use this community space which has grown and grown into a fantastic group session and activity and it’s leaving, already, a great legacy for people.

“We just want people to just start talking – if we can make it normal, we can say ‘being lonely is a thing’ and the more we talk about it, the more we can help people experiencing loneliness. We want people to ‘pom bomb’ the UK and make these pom poms a symbol of isolation and loneliness and together we can raise awareness and reduce it.” 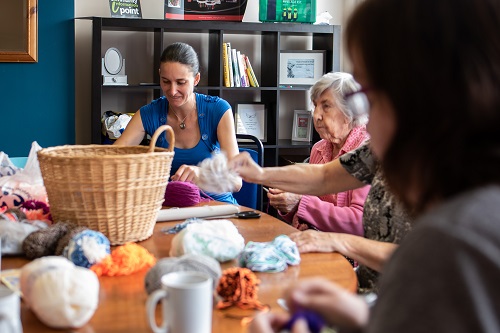 Bromford’s head of locality, Vicky Green, added: “Over the past 12 months we’ve really tried to fill this great space with groups looking to connect with other communities and through this drive the Rainbow Street Community Centre has gone from strength to strength; increasing from 12 people a week to over 250.

“When Just Straight Talk approached us, we knew what a fantastic idea they had and from there we just opened the doors and stepped out of the way. It is amazing to see how the pom poms have gone down not just in the Black Country but much further afield and everyone at Bromford is really proud of their achievements.”

People interested in making pom poms are invited to attend the coffee morning at the Rainbow Community Centre, on Rainbow Street, which takes place between 10am and noon on Thursdays.

A study by The Co-op and the British Red Cross reveals over 9 million people in the UK across all adult ages – more than the population of London – are either always or often lonely.